ALL ABOUT BINDERS AND HOW TO USE THEM

Binders are a crucial part of any healing protocol.

Binders are essentially insoluble fibers. While dietary fiber plays an essential part in daily detoxification, selective binders are used to increase the excretion of specific toxins. 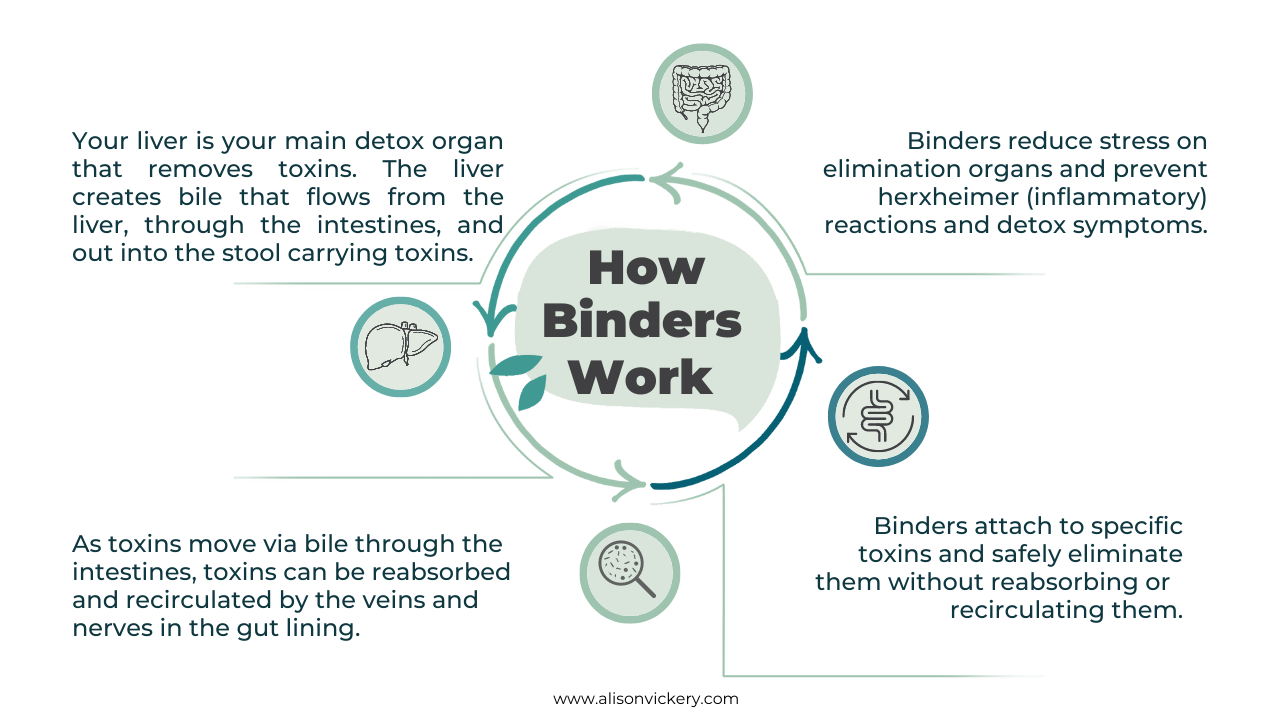 The process of detoxification is a multi-stage process that involves mobilizing, transforming, and eliminating toxins.

When the liver processes toxins, they get bound to the bile, excreted into the gastrointestinal tract, bound with insoluble fibers, and then eliminated via the stool.

When insufficient insoluble fiber or binders absorb the bile, the overflow is picked up in the colon and recirculated via the hepatic portal vein and onto the vagus nerve, where it recirculates in the body.

Therefore, binders reduce the number of toxins recirculated, reduce the load on the liver and kidneys, and speed up the process of elimination, preventing toxin overload.

Health depends on the body’s ability to maintain homeostasis, and toxins or foreign substances can cause a loss of homeostasis.

Removal of toxins or foreign substances is integral to the body’s design. Whole organs, including the liver and kidney, are dedicated to detoxification.

The immune system is under the control of the autonomic nervous system, so the minute it becomes overwhelmed, histamine intolerance, autoimmunity, and mast cell activation are inevitable.

“Most psychiatric disorders, most neurological disorders, most chronic illnesses are not a failure of the genes. It’s the number of toxins stored in the central nervous system and immune system that determines the fate of us humans.”

In around one-third of my client base, toxin overload is the root cause of mast cell activation.

Restoring homeostasis, therefore, requires reducing exposures to toxins and blocking their absorption or upregulating the elimination of toxins (through, amongst other things, the use of binders).

Our diet provides a vital source of fiber to detoxify our daily exposure to toxins.

Many foods bind to bile and assist the body in detoxifying toxins.

Therefore, a healthy diet with plenty of fiber is crucial for toxin elimination.

The table below compares the bile binding capability of fibers from common food sources compared to cholestyramine (Questran).

This is not an exhaustive list, and many fibrous foods (including barley, oats, lupin, corn, rice bran, and psyllium husks) have been shown in the research to act as binders.

While a healthy diet is essential to daily detoxification, diet alone is unlikely to be sufficient in the modern world.

The selection of a suitable binder for the right toxins is a skill. The binder that works well for someone can differ significantly based on their toxin load, and what works well can also change during different phases of healing.

My free eBook, The Insiders Guide to Binders, summarizes the one or two products that work for most people based on autonomic response testing.

The brand used matters. The products used mustn’t introduce new foreign substances. This is true for all binders, especially bentonite clay and zeolite, contaminated with aluminum.

Here are some of the binders that test well and that I use with clients:

It is best used in acute poisoning or chronic die-off situations. Alternatively, in small amounts as part of a blend for a limited time.

Recent studies show that a particular type of charcoal (AST-120 or Kremezin®) available in Japan and Korea is exceptionally effective with irritable bowel syndrome (IBS) due to its high histamine binding capability.

Bentonite Clay is also known as Montmorillonite clay. It is perfect for absorbing mycotoxins in peanuts and on some grains, pesticides, herbicides, and cyanotoxins in lakes polluted by harmful algal blooms. Bentonite clay also has intrinsic broad-spectrum antibacterial properties and has a healing effect on the gastrointestinal lining. Due to contamination, including the presence of aluminum, the source matters.

Chitosan is equivalent to Welchol, used for mycotoxin binding, cholesterol, and weight reduction. Chitosan works by binding to the bile salts themselves, so it binds to all fatty acids. For this reason, it should not be used long-term. Derived from shellfish, chitosan is the result of the enzymatic treatment of chitin, a shell component. People who are allergic to shellfish may not tolerate Chitosan.

Chlorella is blue-green algae rich in vitamins, minerals, iron, and amino acids with a high affinity for heavy metals, but not aluminum, volatile organic compounds (VOCs), pesticides, herbicides, and mycotoxins. Because chlorella is a living organism, it has evolved to bind only to toxic substances, not essential minerals. For this reason, it can be used long-term with no risk of nutritional deficiency over time.

Ecklonia Cava is an alga with essentially the same properties as Chlorella. It is often tolerated when nothing else is and can be used long-term. Ecklonia cava also has various compounds that have been shown to possess anti-inflammatory, anti-allergic, antioxidant, anti-diabetic, anti-retroviral, and prebiotic activities. It is also used for prostate and erectile difficulties.

Enterosgel is a silica-based gel that is a household name in Russia and has been extensively studied. Despite its chemical-sounding ingredients, it is exceptionally well-tolerated and does not bind to micronutrients or beneficial bacteria.

Like zeolite, it binds to histamines. It is marketed for radiation poisoning, food poisoning, traveler’s diarrhea, and a hangover. It also has extensive studies showing it improves irritable bowel syndrome, candida, urticaria, dermatitis, and eczema.  It also has a very high affinity for aluminum.

These are made from decomposed plant matter. They are best known for binding to environmental chemicals such as glyphosate. Taking humic and fulvic acids before a meal may counteract any glyphosate consumption in that meal. They are also relatively weak binders of heavy metals suitable for daily maintenance use.

Modified citrus pectin is manufactured from the inner white pulp of citrus fruit peels. It has a high affinity for lead and a moderate affinity for arsenic and cadmium. It does not bind to nutrients or minerals, making it safe to consume long-term and in conjunction with meals.

Unlike most binders, which do not bind to aluminum, silica selectively binds to aluminum and other metals like thallium and tin.

You can get silica through 1 liter of silica-rich mineral water like Volvic (30mg a liter), Fiji (91 mg a liter), or Acilis water, but these come at the expense of being in plastic bottles.

Purified silica attaches to thiolic (sulfur) metal-binding groups. It has a very high affinity for methyl-mercury, lead, and cadmium. Product options include:

I have written extensively about how Zeolite binds histamines.

It also binds to mercury, cadmium, lead, and mycotoxins. Klinghardt reports that a Russian study found it superior to all other binders (including cholestyramine and bentonite clay) in detoxifying mycotoxins. Indeed, it has excellent coverage of mycotoxins.

Due to the mineral content of zeolite, it is highly alkaline. If you have low stomach acid, taking the zeolite in capsules is vital to alter your stomach acid balance.

The zeolite source matters as there needs to be sufficient silica to bind the aluminum naturally contained within the zeolite. The ratio needs to be more than 5 silica to 1 aluminum molecule.

These brands meet this criterion:

Binders should be taken away from food so as not to interfere with nutrients.

It is generally recommended to take them at least 30 minutes before or 1 – 2 hours after eating or taking any supplements or medications two times a day. Charcoal should be taken 3 hours away from food, supplements, or medications.

In people with a gallbladder, the binder’s timing coincides with the release of bile in response to food. People who have had their gallbladder removed so that bile flows continuously may benefit from dispursing binders four times a day.

Binders can also be taken acutely, in higher dosages, during “die-off” reactions.

For example, with a histamine flare, I take two to three times the amount of zeolite, regardless of whether my stomach is empty, and it resolves in 30 minutes.

Length of Use of Binders

When using binders as part of a healing protocol for chronic heavy metal toxicity, parasites, bacterial infections, candida, Lyme disease, or mold, it may be necessary to pulse the binders.

Some binders, such as chlorella and ecklonia cava, are “intelligent” binders that only bind to toxins and are safe for long-term usage.

Others, like activated charcoal, cholestyramine, and welchol, bind indiscriminately and are best used for acute relief for days (unless in a small amount in a mix).

Yet others fall somewhere in between. While prioritizing certain toxins, they can bind to small amounts of nutrients over time. I usually rotate them 60 days on and 60 days off.

Binders have been used for centuries as a remedy for toxin exposure. They are even used in acute hospital settings today.

They are usually the first part of the protocol I introduce. And the first product I reach for with a histamine flare or die-off reaction.

The selection of which binder is suitable for you will depend on your circumstances. Yet, in my experience, using binders can dramatically improve protocol outcomes.

To learn more about how to use binders, download my free eBook, The Insiders Guide to Binders.

Galvano, Fabio, et al. “Activated carbons: in vitro affinity for ochratoxin A and deoxynivalenol and relation of adsorption ability to physicochemical parameters.” Journal of food protection 61.4 (1998): 469-475.

Avantaggiato, Giuseppina, Robert Havenaar, and Angelo Visconti. “Evaluation of the intestinal absorption of deoxynivalenol and nivalenol by an in vitro gastrointestinal model, and the binding efficacy of activated carbon and other adsorbent materials.” Food and chemical toxicology 42.5 (2004): 817-824.

Jiang, Ya-Hui, et al. “The efficacy of bamboo charcoal in comparison with smectite to reduce the detrimental effect of aflatoxin B1 on in vitro rumen fermentation of a hay-rich feed mixture.” Toxins 6.7 (2014): 2008-2023.

Nones, Janaína, et al. “Organophilic treatments of bentonite increase the adsorption of aflatoxin B1 and protect stem cells against cellular damage.” Colloids and Surfaces B: Biointerfaces 145 (2016): 555-561.

Bhattacharyya, Krishna Gopal, and Susmita Sen Gupta. “Adsorption of a few heavy metals on natural and modified kaolinite and montmorillonite: a review.” Advances in colloid and interface science 140.2 (2008): 114-131.

Gallaher, Cynthia M., et al. “Cholesterol reduction by glucomannan and chitosan is mediated by changes in cholesterol absorption and bile acid and fat excretion in rats.” The Journal of Nutrition 130.11 (2000): 2753-2759.

Gerente, C., et al. “Application of chitosan for the removal of metals from wastewaters by adsorption—mechanisms and models review.” Critical reviews in environmental science and technology 37.1 (2007): 41-127.

Solís-Cruz, Bruno, et al. “Evaluation of Chitosan and Cellulosic Polymers as Binding Adsorbent Materials to Prevent Aflatoxin B1, Fumonisin B1, Ochratoxin, Trichothecene, Deoxynivalenol, and Zearalenone Mycotoxicoses Through an In Vitro Gastrointestinal Model for Poultry.” Polymers 9.10 (2017): 529.

El-Gamal, Rehab, et al. “The use of chitosan in protecting wooden artifacts from damage by mold fungi.” Electronic Journal of Biotechnology 19.6 (2016): 70-78.

Hope, Janette. “A review of the mechanism of injury and treatment approaches for illness resulting from exposure to water-damaged buildings, mold, and mycotoxins.” The Scientific World Journal 2013 (2013).

Bard R. Effects of Humic Acid on animals and humans: An Overview of Literature and a Review of Current Research. 2002. pg. 3-7.

Zhao, Zheng Yan, et al. “The role of modified citrus pectin as an effective chelator of lead in children hospitalized with toxic lead levels.” Alternative therapies in health and medicine 14.4 (2008): 34-39.

Clarkson, T. W., et al. “Tests of efficacy of antidotes for removal of methylmercury in human poisoning during the Iraq outbreak.” Journal of Pharmacology and Experimental Therapeutics 218.1 (1981): 74-83.