EASY PROTEIN SWAPS THAT LOWER HISTAMINE WITHOUT CUTTING OUT FOODS

The secret to a low histamine diet is simple. It is high-quality nutrition.

While it is true that some nutritious foods contain histamines naturally, the majority of high histamine foods are often an indication that the otherwise nutritious food has deteriorated in quality.

It is possible to dramatically lower your histamine levels (and keep more foods in your diet) simply by the way we buy, store, cook, and eat food.

Here are six easy swaps you can make with protein that profoundly affect your histamine levels. 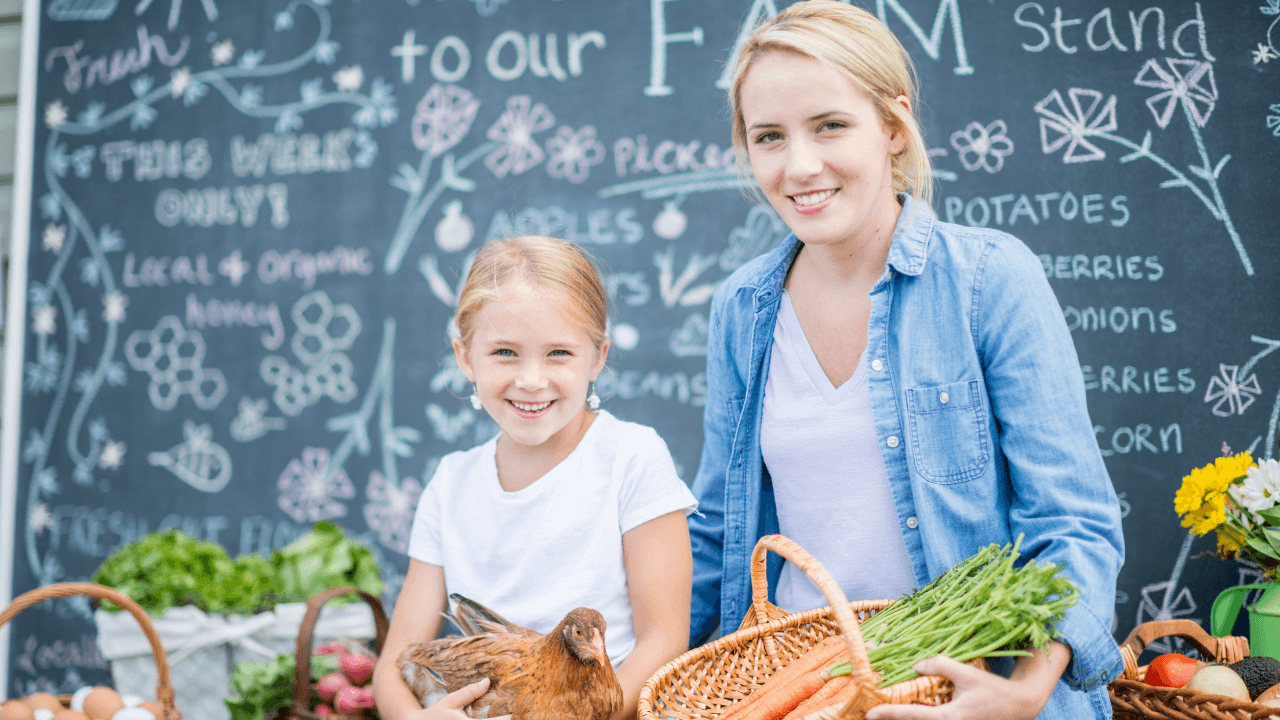 “Fresh” supermarket meat may be packaged in vacuum or gas packs and may be up to 4 months old.

Studies show that these packs might make meat look good, but histamines continue to build during this time.

Butchers may also purchase poultry in bulk (mainly when prices are low) and freeze it for up to 6 months. Always ask if poultry has been frozen.

Swap for fresh meat from a butcher who can tell you exactly when the animal was processed. Alternatively, go directly to the farm or farmers’ market.

Meat should be no older than 1 – 2 weeks from processing. It should be used on the day or frozen and eaten within 1 month.

Many butchers will also do a custom order to guarantee freshness. 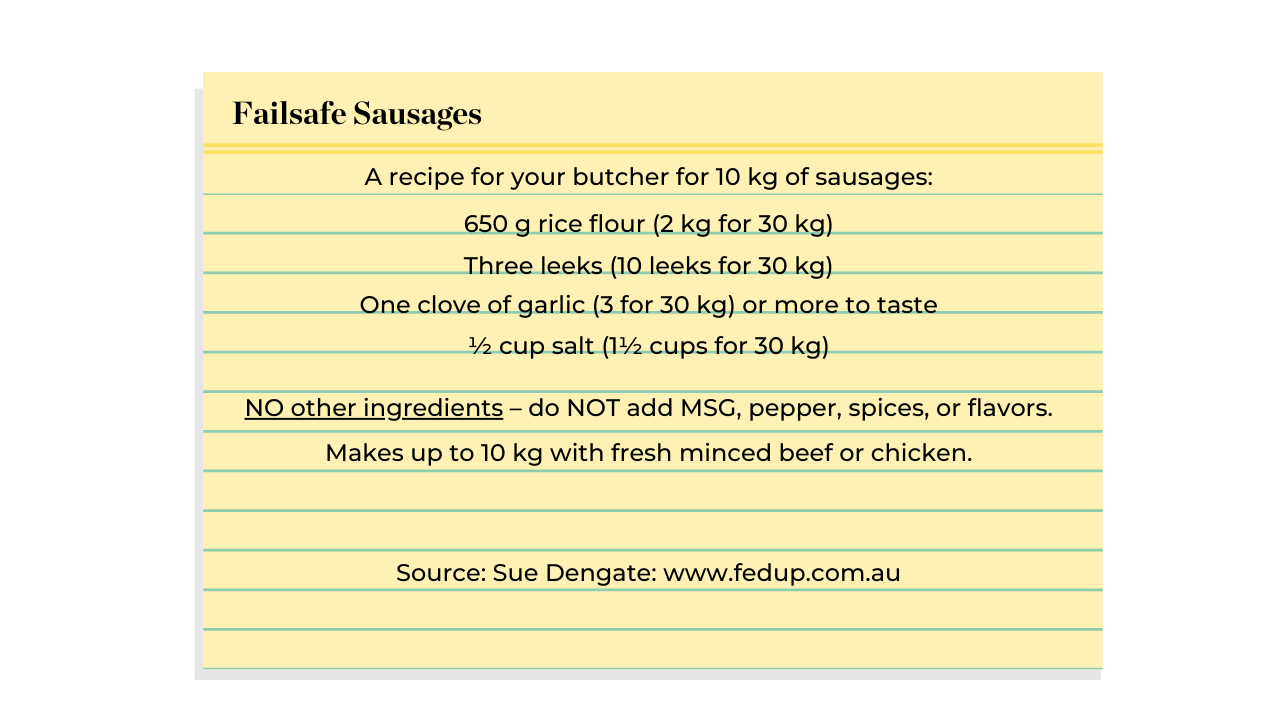 Sausages have a significantly higher histamine level than whole meats because the meat has been processed to expose a greater surface area to bacteria.

Sausages also contain a lot of other additives to assist with the preservation and enhance flavor.

Even preservative and gluten-free sausages may contain problematic ingredients such as starch, onion powder, spice, flavor, and yeast extract.

Swap to custom butcher sausages (or make your own) and ask your butcher to freeze them immediately in portions using the recipe above, which Sue Dengate for www.fedup.com.au has kindly provided. 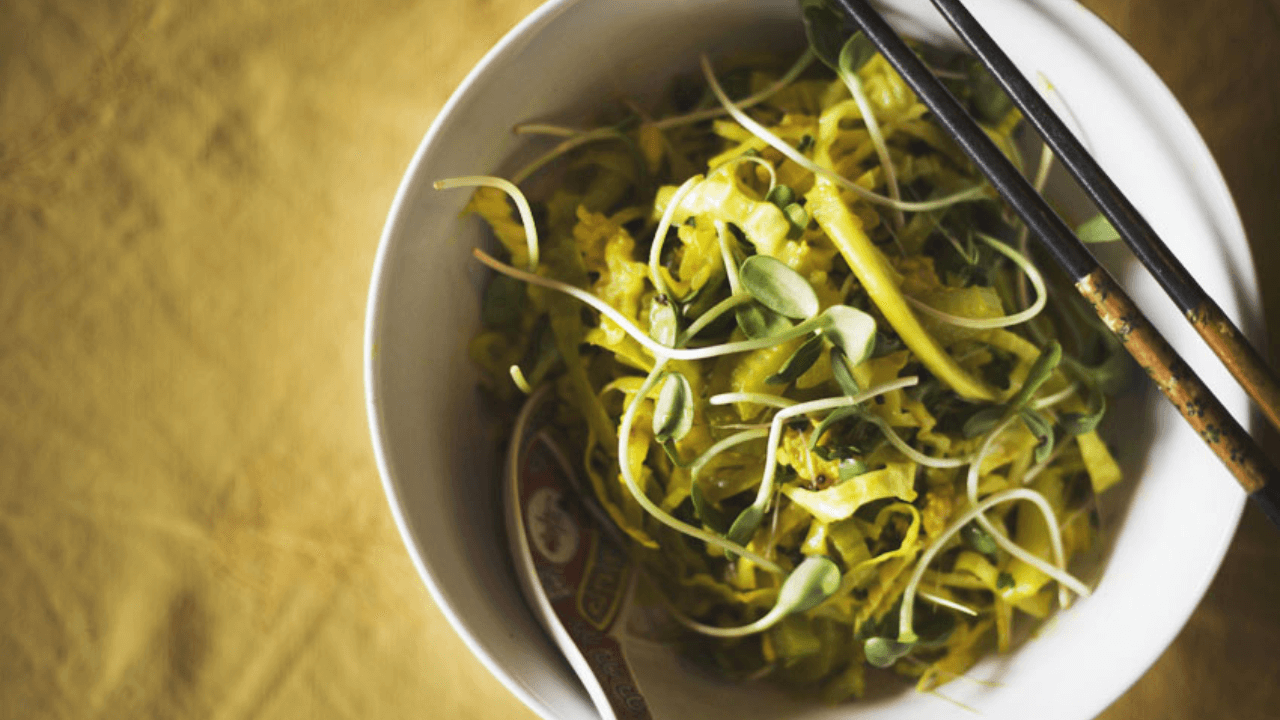 Pre-minced meat also has a significantly higher amine level than whole meats because the meat has been processed to expose a greater surface area to bacteria.

For this reason, it is also usually treated with sulfites to preserve for sale.

In Australia, it is illegal to do this. Still, a survey undertaken by www.fedup.com.au found that up to 50% of butchers will add illegal sulfite preservatives to mince if they are not constantly monitored.

Swap to mincing your meat at home, which is simple and failsafe. The secret is to include fat (around 10%) with the meat and to pulse (not run) the food processor.

Histamines dramatically increase when meat is cooked at high temperatures.

One study found that histamines increased by up to three times more when meat was cooked at 250 degrees Celsius (rather than 200 degrees).

Histamines also moderately increase when cooked for long periods. Other forms of protein, such as eggs and milk, are not affected.

Swap to steamed, boiled, poached, or oven-baked as the primary cooking method for meat.

Crockpot, and pressure-cooked, meat may be tolerated intermittently as part of a rotation diet. Do not eat blackened, well-done, or burnt meat. 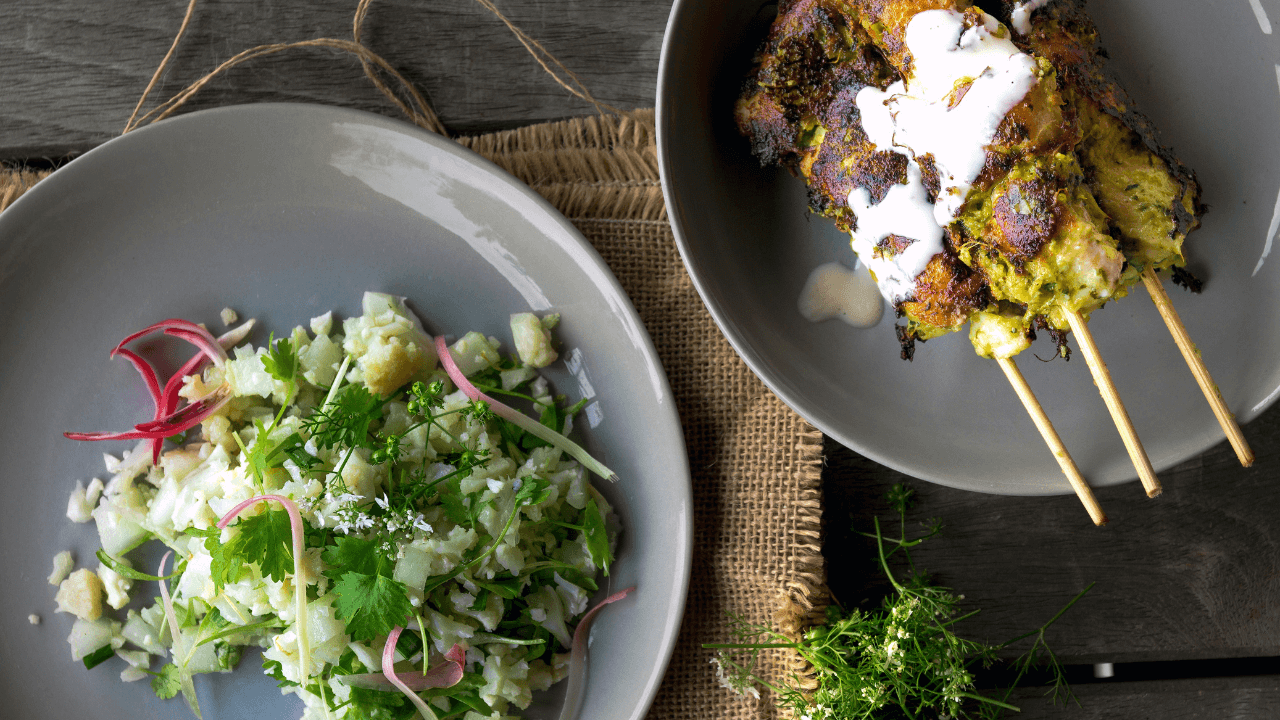 Marinades, rubs, or added ingredients of plant-based polyphenol and anti-oxidants lower histamines formed when barbecued, grilled, fried, or stir-fried by up to 70%.

Swap some meals for soups, stews, marinades, and rubs with tolerated histamine-reducing ingredients to lower the histamine content.

The following ingredients have been studied and found to stop amines from increasing during cooking:

Fats: Olive oil (but not other oils). Non-virgin olive oil (in a glass bottle) is usually best tolerated.

The data on turmeric is contradictory. While turmeric may reduce amines from cooking, it inhibits DAO, inhibiting biogenic amine reduction. Tumeric should be used in moderation, preferably when cooking meat but not as a supplement.

Do not add sugar or purchase commercial marinades with sugar. Studies show that sugar may double or even triple the levels of amines formed in cooking. 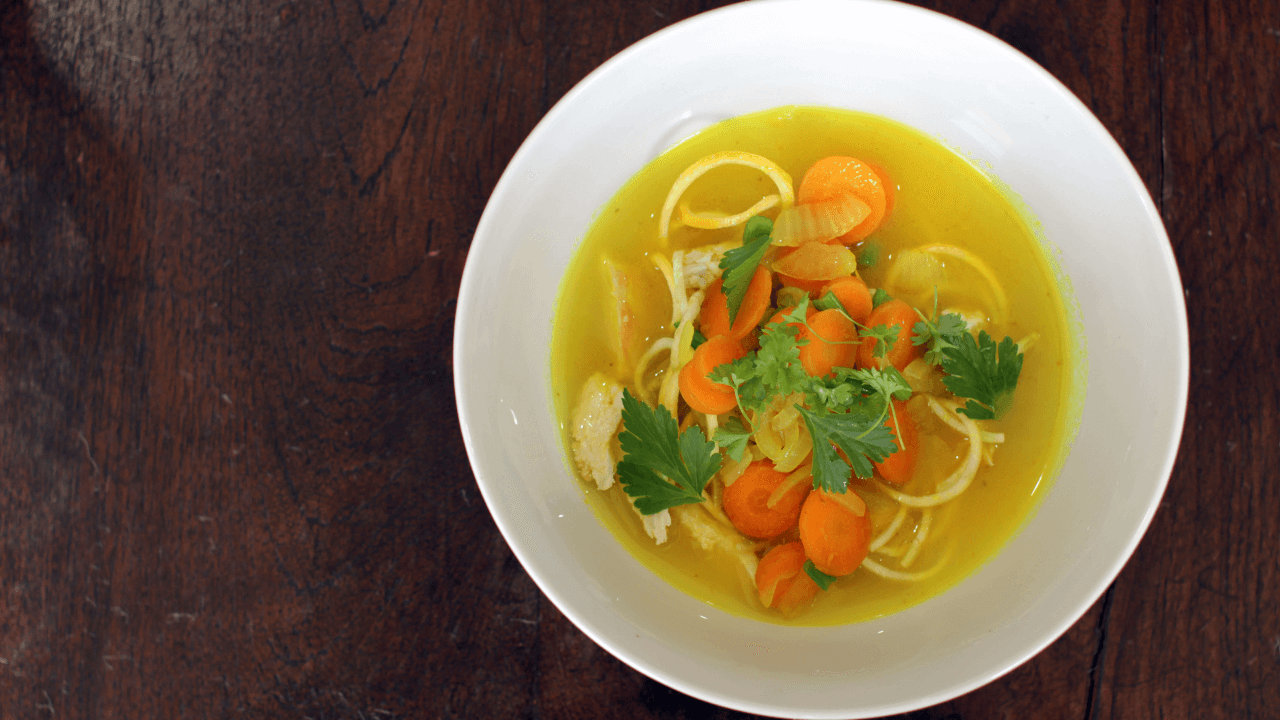 Poultry is generally well tolerated on a low histamine diet.

However, studies show that when poultry is cooked with the skin intact, even if it is removed after cooking, it has significantly higher histamines from the cooking process.

Swap to remove the skin from poultry before cooking to reduce the histamines produced in cooking. 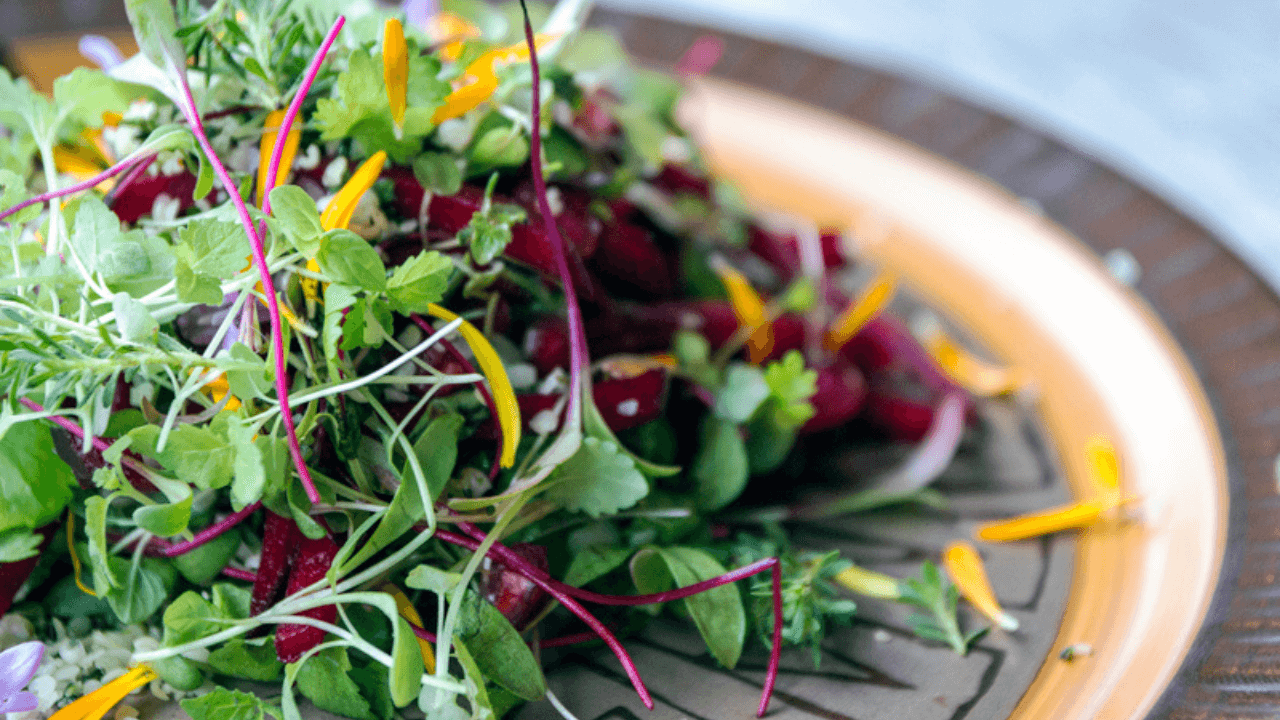 Swap Some Protein for More Vegetables

However, not all levels of histamines between the food groups are the same.

Most protein is relatively high in histamines, while most vegetables are relatively low.

Swap to include more vegetables in your diet.

Protein and a balanced diet are still vital, so the point is to be conscious of how much protein and vegetables you eat, especially on a Paleo or Carnivore diet.

Buy the best quality you can afford, even if you have to eat the cheaper cuts of meat.

One of the most common mistakes is eliminating foods before addressing food quality.

Once we understand that amines increase with food aging and are not necessarily the foods themselves, we can address the root cause and leave more foods in our diet.

To learn more about how amines build in foods, read my post, Safe Food Handling and Histamine Intolerance.