Histamine and estrogen are intrinsically linked.

It is no coincidence that a high incidence of people who acquire histamine intolerance are women. The common link is estrogen.

Whether the ovaries produce too much estrogen or the body is processing the hormones well, both profoundly impact histamine levels.

And how we process estrogen has everything to do with histamine intolerance.

The Role of Hormones

This is why we look and feel our best when hormones are in balance, and when they are not, we can have widespread symptoms like histamine intolerance. 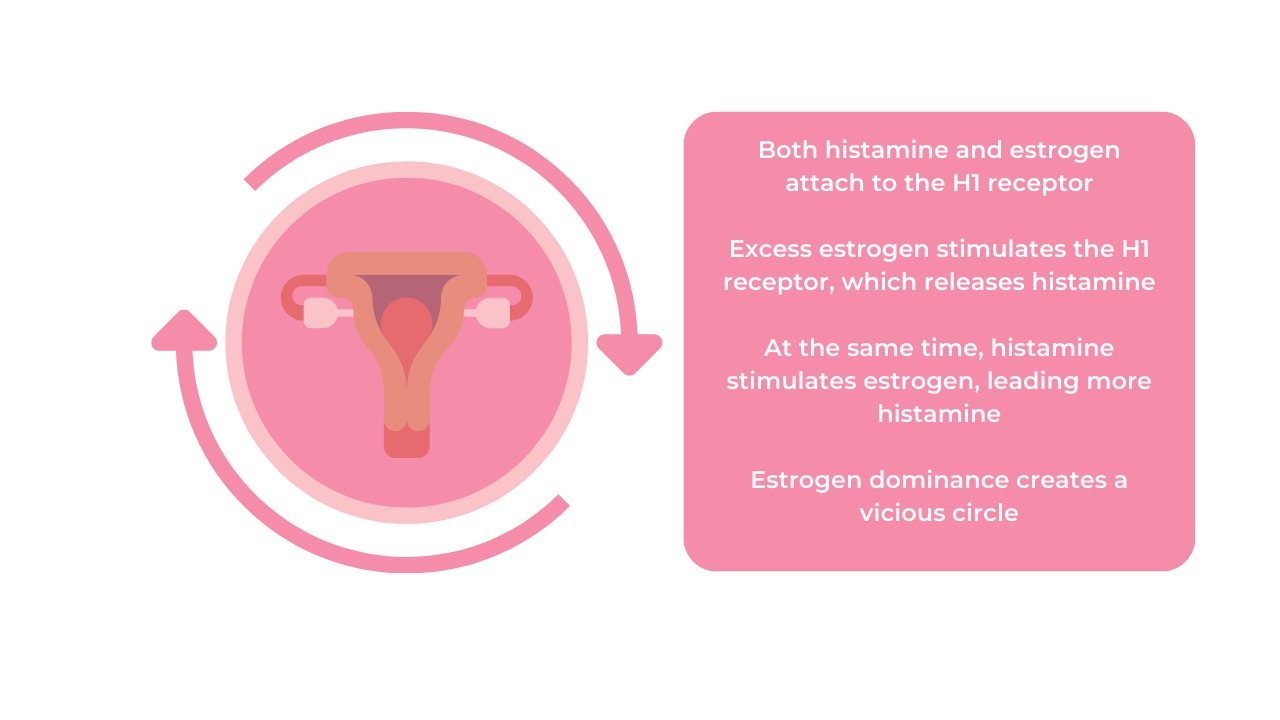 Which hormones affect which cells depends on whether the “key” or hormone fits the “lock” or receptor on the cell. Receptors interact with and bind to specific hormones.

Both histamine and estrogen attach to the H1 receptor.

When excess estrogen attaches to the cell, it stimulates the H1 receptor and releases histamine from the cell. The more estrogen that is circulating, the more histamine will be released.

At the same time, histamine stimulates estrogen, leading to a vicious circle.

Histamine intolerance occurs when there is an excess of histamine.

Excessive estrogen has been shown to modify intestinal permeability, which can, in turn, reduce diamine oxidase (the enzyme that degrades histamine)

So not only does excessive estrogen stimulate the release of histamine, but it also can reduce the ability to degrade histamine.

A menstruation cycle lasts approximately 28 days and has three phases:

Phase 1 is the follicular phase, during days 1 – 10, in which the top lining of the uterus is shed, and menstrual bleeding commences. During this stage, there are rising estrogen levels, and histamine intolerance symptoms seem to worsen.

Phase 2 is the mid-cycle phase, during days 11 – 14, in which hormones begin to release eggs from the ovaries for conception.

Phase 3 is the luteal phase, during days 15 – 28, in which hormones alter the endometrial lining to protect an embryo (if conceived). During this phase, there are rising levels of progesterone.

In women, progesterone balances estrogen. It puts the “brakes” on estrogen.

Also, as we age, progesterone is the 1st hormone to decline, then estrogen, then testosterone.  This decline takes a couple of years until homeostasis (at a lower balanced menopausal level) is restored.

It is, therefore, no coincidence that middle-aged women are susceptible to histamine intolerance. Supporting progesterone that balances estrogen can be helpful. 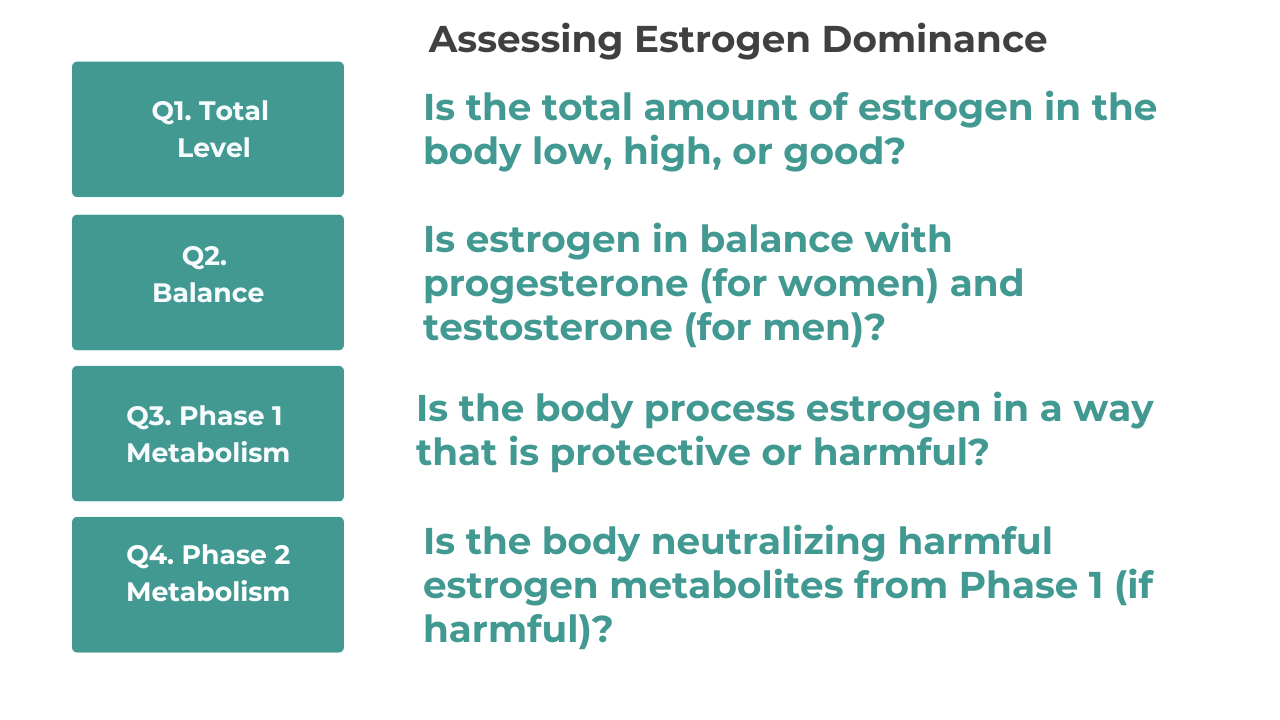 There are four steps to assessing histamine dominance as follows:

The steroidal hormone pathway is the system the body uses to produce estrogen.

DHEA is necessary for the production of both testosterone and estrogen.

2. Is Estrogen In Balance

When evaluating the hormone pathway, we are also concerned about hormone relationships. Hormones act in tandem to establish homeostasis.

In women, progesterone balances estrogen. It puts the “brakes” on estrogen via the E2 receptor.

Estrogen dominance can occur if estrogen is high or higher than progesterone.

However, the ultimate biological effect of estrogen in the body depends on how it is cleared.

So, while it’s helpful to know how much estrogen someone is making and how the total estrogen level compares to total progesterone, it’s even more important to know how estrogen is being cleared.

Estrogen is transformed repeatedly throughout the body before elimination. Problems can occur at many points in the process, and once again, the point at which the dysfunction occurs gives us clues as to the root cause.

Phase 1 activates estrogen by adding a hydroxyl group and splits it into three pathways:

4 hydroxy (4-OH) has the most potential to damage the DNA.

16 hydroxy (16OH) has the potential to proliferate any DNA damage.

Because phase 1 turns estrogen into an active substance, which of the three detoxification pathways estrogen takes is essential.  Ideally, we want the vast majority (70% or more) to go down the 2-OH pathway.

While the activity of the CYP1A1, CYP1B1, and CYP3A4 genes regulate these pathways, environmental factors primarily determine the outcome.

However, the body has compensatory mechanisms, and sub-optimal phase 1 clearance may not be a problem, provided there is good phase 2 clearance.

Some intestinal bacteria (mostly bacteroides, which are also histamine-producing) have an enzyme, beta-glucuronidase, that breaks the bond between estrogen and glucuronic acid, allowing it to re-enter circulation.

The beta-glucuronidase marker is not available on the Dutch Test but is picked up on a comprehensive gut test.

Glutathione is a backup system for phase 1 and phase 2. It also neutralizes the 16-OH pathway and other remaining toxins. It relies on adequate levels of glutathione.

Other reasons that estrogen may be dominant include:

The fact that some conditions (such as histamine intolerance, SIBO, and auto-immunity) are more prevalent in women than men indicates how important our hormones are to our overall health.

When our hormones are unbalanced, we can experience wide-ranging symptoms, including histamine intolerance.

While our production of hormones can be affected, how we process hormones within our body has as much, if not more, to do with our overall health.

Equally, hormones have a lot to do with our environment. Addressing the underlying cause can re-establish healthy hormone levels and improve histamine tolerance.

The right solution, however, will depend upon the individual, including the root cause.

Szelag, A., A. Merwid-Lad, and M. Trocha. “Histamine receptors in the female reproductive system. Part II. The role of histamine in the placenta, histamine receptors, and the uterus contractility.” Ginekologia Polska 73.7 (2002): 636-644.

Cornish, Julie A., et al. “The risk of oral contraceptives in the etiology of inflammatory bowel disease: a meta-analysis.” The American journal of gastroenterology 103.9 (2008): 2394.

Zheng, Wanglong, et al. “Effects of zearalenone and its derivatives on the synthesis and secretion of mammalian sex steroid hormones: A review.” Food and chemical toxicology (2019).